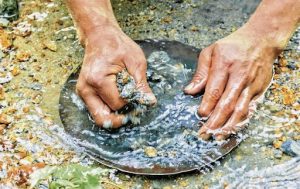 A US entrepreneur who claims to have discovered a new, more efficient and environmentally friendly process to recover gold is looking for partners in South and East Africa.

Anastasios Morfopoulos, who has established a company called New Gold Recovery and attracted New York-based hedge fund UniCore Group Capital as a 20% shareholder, has discovered “certain nano-particles that demonstrated a natural affinity for gold and other precious metals”. This technique, Morfopoulos says, can recover more than 90% of the gold in alluvial deposits.

SA has very little alluvial gold, but Morfopoulos believes his technology, which has been independently verified by Bureau Veritas Group and Global Mineral Research, could also help to improve recoveries from gold in hard rock.

Three years ago, various publications, including Popular Scientist, described how Zhichang Liu, a researcher at Northwestern University in the US, discovered that alpha-cyclodextrin (sourced from cornstarch) showed great affinity with gold particles.

Morfopoulos’s process does not use mercury, cyanide or cornstarch, he says. “The process uses a collector that is produced from natural, nontoxic ingredients that attracts gold, silver and platinum but rejects other minerals. It acts like a ‘green mercury’.

The collector has been tested on gold loads of up to 15,000g/t. Once loaded, the collector is replaced and shipped out,” he says.

“We are aware of and sensitive to the matter of security and prefer not to disclose too much … We have not applied for a patent exactly for this reason, preferring to take the ‘Coca-Cola’ formula approach and keep the recipe secret.”

A local gold mining company, which asked not to be named, says it has reviewed the technology, but what works in a laboratory could be very difficult to replicate in a large-scale processing operation.

“Once the technology is proven on a plant scale (greater than 100,000t/month) we would probably be interested in investigating it further. Meanwhile, we have to produce gold from the infrastructure we have now.”

New Gold Recovery originally intended to license its technology to other primary producers, but it has now decided to do so while also mining a recently purchased deposit, Black Rock Canyon Mine in Nevada.

UniCore senior partner Herve Ime says: “We see this as a killer technology, rather like what Google is to the Internet.”