IS THIS THE HOLY GRAIL OF GOLD MINING? | New Gold Recovery
317
post-template-default,single,single-post,postid-317,single-format-standard,qode-quick-links-1.0,ajax_fade,page_not_loaded,,qode_grid_1300,footer_responsive_adv,hide_top_bar_on_mobile_header,qode-content-sidebar-responsive,qode-child-theme-ver-1.0.0,qode-theme-ver-11.2,qode-theme-bridge,wpb-js-composer js-comp-ver-5.2.1,vc_responsive

IS THIS THE HOLY GRAIL OF GOLD MINING? 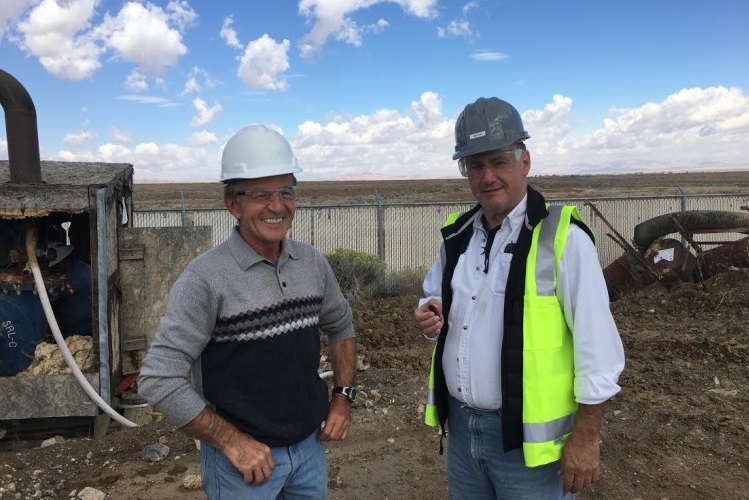 06 May IS THIS THE HOLY GRAIL OF GOLD MINING?

Inventor and CEO of New Gold Recovery Inc., Anastasios Morfopoulos, appears to have found the holy grail of gold mining – a low cost, environmentally friendly recovery system that extracts up to 95% or more of the gold and other precious metals.

With gold prices languishing below $1,300 an ounce for the better part of three years, only the brave or the foolhardy would venture into a sector where most mines are struggling to break even.

Meet Anastasios Morfopoulos, CEO of New Gold Recovery Inc, which recently acquired the rights to start mining over 2,900 acres in the U.S. state of Nevada. Production will commence in March 2017 with a monthly target of 1,000 ounces, doubling to 2,000 ounces a month by the end of 2017. New Gold Recovery (NFR) has a secret weapon that is fast attracting interest from other miners around the globe: a proprietary gold recovery procedure that has been shown to collect up to 95% of all precious metals at a fraction of the cost of conventional recovery methods, and without the need for mercury, cyanidation and other toxic agents. Mine operators from Africa to South America and beyond have been sending samples to NGR for testing and the results have borne out claims of recovering more than 95% of the precious metals.

Morfopoulos reckons traditional placer miners are losing almost half of their gold in traditional recovery processes, which relies on mills to separate the gold from the ore and then traps the liberated gold by means of a gravity system as it is washed down a sluice. But as much as half of the gold ends up in the tailings. These are the tiny particles, generally smaller than 100 microns, that do not respond to gravity-based recovery. Until now, there has been no way for placer miners to trap these particles.

Morfopoulos developed the procedure over the course of a decade, and came up with a finely balanced mixture of “collection agents” that attract the precious metals, including the very fine dust.

Though the system has been piloted extensively with placer mines in the U.S., Morfopoulos believes hard rock recoveries could also benefit from the technology, aptly named Tas 3 (Tas being short for Anastasios, the “3” representing the number of system evolutions).

Hard rock mines, with their sophisticated recovery plants, have much better recovery rates than placer mines, but even here there is potential for improvement that NGR wants to harness. Morfopoulos says he is looking for joint venture partners in South Africa and East Africa, where vast tailings and alluvial deposits await a better “mousetrap”.

For the moment, his focus is on placer mining, specifically NGR’s 2,900 acres on 67 mines in Nevada, which just recently received approval from the U.S. Bureau of Land Management (BLM) for its plan of operation. He is making the Tas 3 technology available to other miners on a profit share basis, and is now testing samples from around the world to see if the recovery grades can be improved. “In most cases, we are showing substantial improvements in recovery once Tas 3 is applied to the samples,” says Morfopoulos. For marginal operators, this is clearly a game changer.

In 2014, NGR acquired more than 6,000 acres of land in north-east Nevada, one of the world richest gold and silver producing region with over 50 active mines and annual production of 4.95m troy ounces of gold and 10.94m troy ounces of silver. NGR acquired the Black Rock Canyon Mine deposit, reckoned to have $480m worth of gold deposits (at an assumed gold price of $1,000 an ounce) lying no more than 90 feet below the surface. This also gave it the funds to refurbish an old processing plant on the site. Morfopoulos says the company is planning an initial public offering in the course of the year, which will give it sufficient capital to expand its activities in the south-west U.S and elsewhere.

The gold mining industry is crying out for something a technology like this. “We see this as a killer technology, rather like what Google is to the internet,” says Morfopoulos.

“The interest in the Tas 3 technology is huge. Any system that can show such a dramatic improvement in recoveries is bound to attract interest, both from miners and investors, and we are looking at a number of opportunities for expansion where this technology can be effectively deployed.”

Production will start in August 2016, and the company expects to produce 1,000 ounces a month, ramping up to 2,000 ounces by 2017. That makes it a decent mid-level player. Apart from gold, the company will generate revenue by offering its technology on a Profit-Sharing Program with other producers.

Given the fact that roughly 80m ounces of gold are mined each year, a small percentage improvement in recovery could mean the difference between life and death for many of the millions of mines, big and small, around the world.